Numbers of Pedestrian Deaths in CA and Nationwide Climb 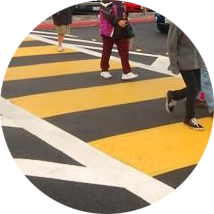 In California and elsewhere throughout the country, being a pedestrian is dangerous. A recent government report reveals that while traffic fatalities have decreased, pedestrian deaths have risen. The swing marks pedestrians as the most at-risk group in traffic accidents over the past quarter century.

Campaign to walk may increase fatalities

Many states, including California, have poured resources into promoting walking as a mode of transportation. Advocates stress that walking is good for health, reduces traffic, does not cost anything, and reduces pollution. However, there are a number of hazards that can make walking as transportation especially dangerous. The GHSA report found major contributions to pedestrian fatalities to include:

Who is liable in a pedestrian accident?

Blame is not always clear-cut when a car strikes a pedestrian. More than 70% of the fatalities occur when a pedestrian is crossing outside a crosswalk. More than a third involve alcohol. The driver may have been speeding. Sometimes physics experts are needed to explain how exactly an accident happened. To complicate matters further, an at-fault driver may not own the car he was driving, bringing other parties, and often, additional insurance companies, into the mix.

The key will be determining whether each party acted reasonably. A driver is under a duty to operate the vehicle in accordance with traffic laws and in a way that does not harm others. Pedestrian are under a duty to be careful, including being aware of what is going on around them.

When a party is found liable, the victims or their families may be entitled to compensation that includes:

Sometimes personal injury victims worry about the litigation process and the prospect of going to trial. Very few civil cases go to trial because the civil litigation process encourages the parties to settle before that point. State insurance laws mean that in most cases, the at-fault parties are insured and the insurance companies will step in to negotiate the case. These are the kinds of things that experienced Los Angeles pedestrian accident lawyers look at with a trained eye.

If you have been injured in a car or pedestrian accident, the Los Angeles personal injury attorneys at The Salamati Firm will help you protect your rights. Call 888-259-4060, any time day or night, for a free case evaluation.